Is this a valid tax invoice?

We all know that you can claim input tax for any amount less than R5 000, with an abbreviated, or shortened tax invoice. This means the name, address and VAT number of the buyer doesn’t have to appear on the tax invoice. Essentially, it can be made out as ‘cash’.

Now have a look at this abbreviated tax invoice below. What do you think is glaringly wrong with it? 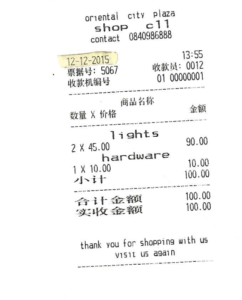 So what’s wrong with the Oriental Plaza receipt?

Apart from the fact that the words ‘tax invoice’, the address and VAT number (possibly) isn’t on it, it’s only partially issued in one of the 11 official languages of this country. And there’s no indication of the currency type – i.e. Rand, Zimbabwean Dollar or Pound!

Did you know that it’s a per-requisite for the whole tax invoice to be issued in one of our official languages, and that it must be in Rand?

If you’d claimed the input tax on this slip, do you think the SARS auditor would allow it?

And on the subject of the wording, if you held a document called ‘VAT invoice’ or ‘Proforma Invoice’ and claimed input tax as indicated on it, would the document be valid?

As a VAT consultant and previous VAT law administrator at SARS, I see so many vendors getting their invoicing wrong. And you’d be surprised to learn that even one of SA’s biggest retailers has been guilty of this very same error!

So I’m invested in training VAT vendors to help them get their VAT right. At my various training events, I cover issues on your tax invoices and show you what they need to be accepted by SARS. Plus, I’ll let you in on the five red flags SARS looks out for in your supporting documentation to try and deny your input tax claim – so you can avoid this situation. Plus, I’ll show you missed input tax deductions you can claim, but didn’t know you could and more…

Simply message me and I’ll keep you updated on my next training sessions.

Dee Bezuidenhout is a former VAT Manager at BDO, ex-SARS law administrator, interpreter and auditor at SARS with over 26 years VAT experience. Dee has drafted several VAT guides for SARS and assisted several countries with the implementation and drafting of their VAT laws. She is also the original author of the Practical VAT Handbook and has held over 100 VAT workshops, including to SARS’ own staff.

There are no upcoming events at this time.

Exempt… or not exempt? When goods or services fall away from VAT
Scroll to top